Deck demolition is rarely a simple process. Not only do you have to go through the difficult process of replacing decking boards with new ones, but there’s a very specific method you have to stick with to maintain the structural integrity of your deck.

This “process” is one that Jon Nolle knows very well. As a professional building and remodeling contractor, Nolle knows how arduous a process it can be to remodel a deck, especially when trying to remove deck boards without damage to the frame. After years of replacing decking boards the “old-fashioned way,” Nolle decided that he was ready to find a better way. That better way eventually became the Wrecking Claw.

This deck nail removal tool replaces an army of friends and relatives. Instead of people crawling around on their hands and knees with crowbars, you’ll harness the leverage of the floor joists to pry up boards and any fasteners left behind easily. And thanks to the 44” length of the dual claw wrecking bar, you can do it all from a standing position.

When approaching a deck remodeling or refurbishment project, if you’re using the existing frame, never strip the decking from the entire deck all at once. This mistake can damage the integrity of your deck, making it unstable. You’ll also end up creating more work for yourself in the long run. Instead, take off the railings first, and then you can start removing the boards with your dual claw wrecking bar.

With the Wrecking Claw, you’ll want to pry off 5-6 boards from the outside edge first and then reapply 3-4 new boards in their place. Preserve the integrity of the deck frame by removing and replacing a small number of boards at a time.

After you replace all the decking, add a “skirt board” to the outside frame of the deck. This “skirt” is essentially a 1”x8” board fastened to the outside edge of the deck that provides a professional finished look and allows you to slide the decking an inch and a half outward and avoid the new fasteners falling into the holes created by the old fasteners. The decking can overhang the skirt board three-quarters of an inch.

Of course, each deck is different, but this process is as close to universally applicable. Once you’ve taken care of those first 5-6 boards, you can repeat the process up to the house. Take off 5-6 boards, replace them, and leave about eight inches between the new and the old for you to slide the Wrecking Claw along the floor joist and repeat until complete. Simple!

THE WRECKING CLAW LETS YOU REMOVE DECKING FASTER THAN EVER 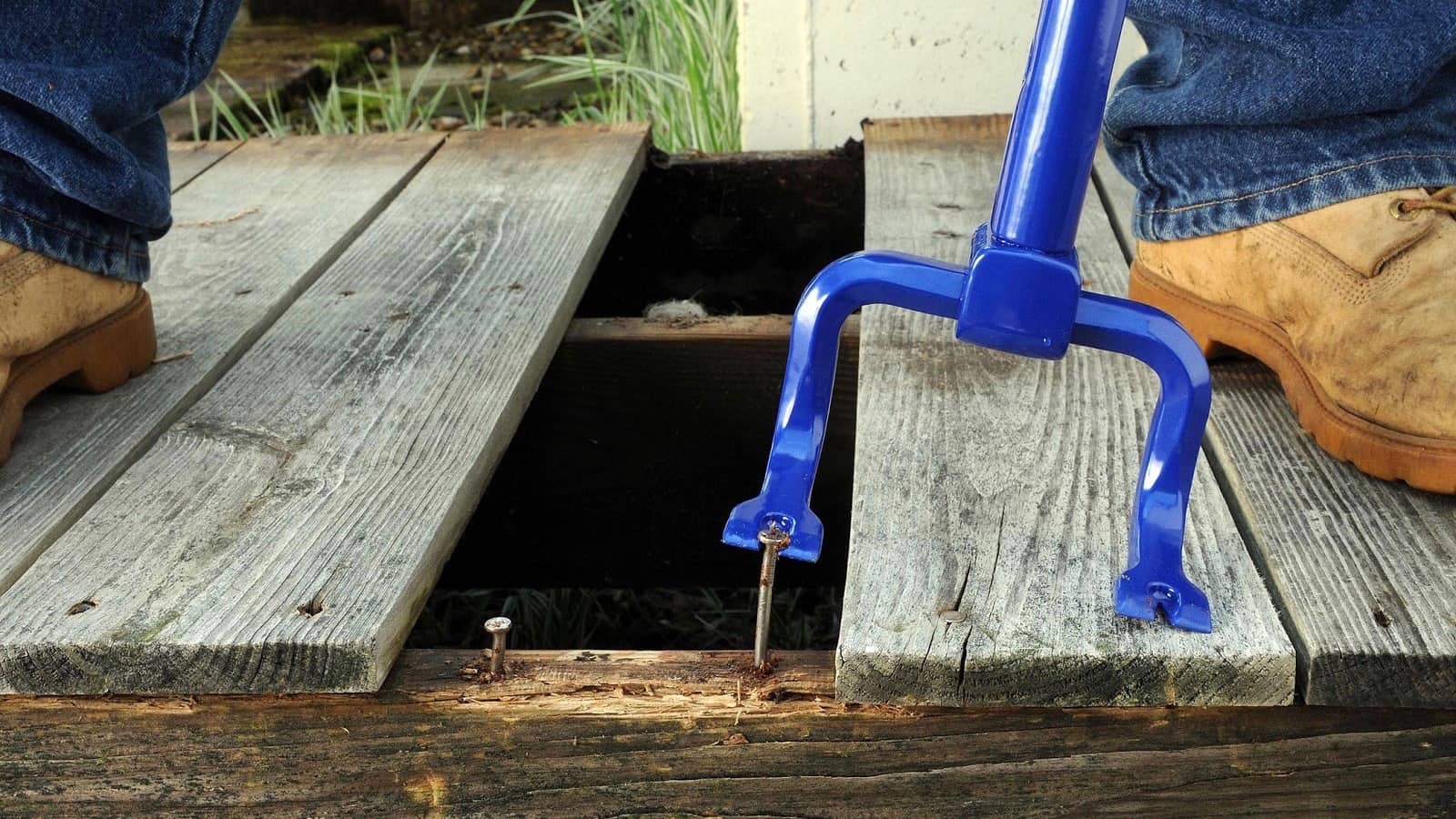 While the process outlined above is essential, it can also be time-consuming. You could spend the better part of a day on it if you’re doing it the old-fashioned way—which usually involves a hammer, a crowbar, and long hours working on your hands and knees. However, with the Wrecking Claw deck nail removal tool, Jon Nolle has empowered contractors and do-it-yourselfers to remove decking faster.

THE BEST DECK BOARD REMOVAL TOOL ON THE MARKET

With the Wrecking Claw’s patented dual-claw rocking design and 44” handle, you could remove the decking from a 10’x10’ deck in well under an hour. Even after you factor in the additional time needed to reinstall the new decking, a demolition tool like the Wrecking Claw can realistically replace an army of friends and let you finish a project, on your own, in record time.

Look no further than the Wrecking Claw if you’re looking for a durable, dynamic, powerful pallet breaker or deck board removal tool. Invented by a contractor who wanted to find a way to get his crew to work quicker and safer, the Wrecking Claw is the kind of deck nail removal tool that belongs in everyone’s toolkit.